Christmas No Bake – How To Make Snowman Cake Pops

Most people that know me know that I’m not a particularly skilled cook. Though I do love to bake things and like playing around with sweet stuff and cakes much more! One lunchtime at work I popped into the Co-op and saw they had this cute snowman cake pops kit. The box boasted the term “no bake” and I just couldn’t resist picking it up with the aim of giving it a go on my time off work over Christmas. So here’s my attempt! 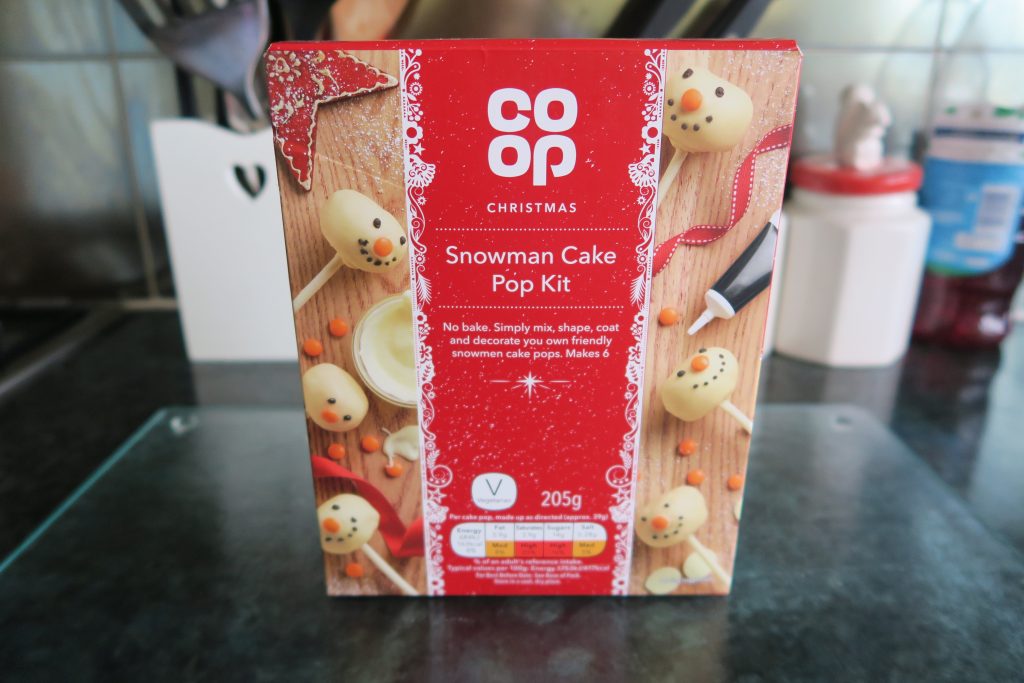 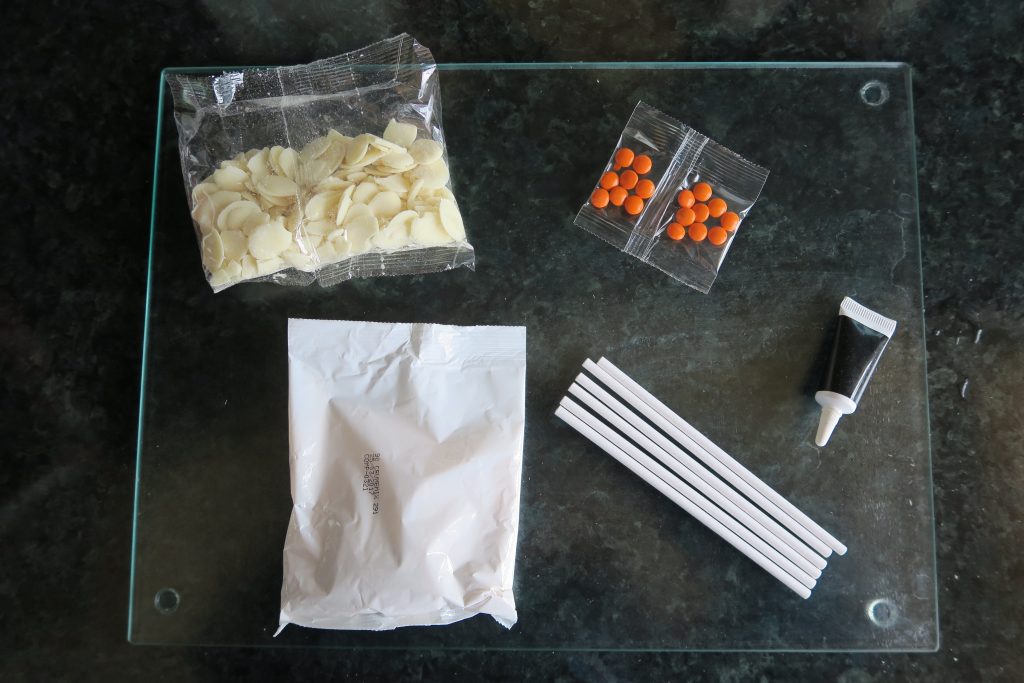 The kit is super simple, it comes with cake mix, chocolate to melt down and then any little accompaniments like straws and buttons for the noses of the snowmen. 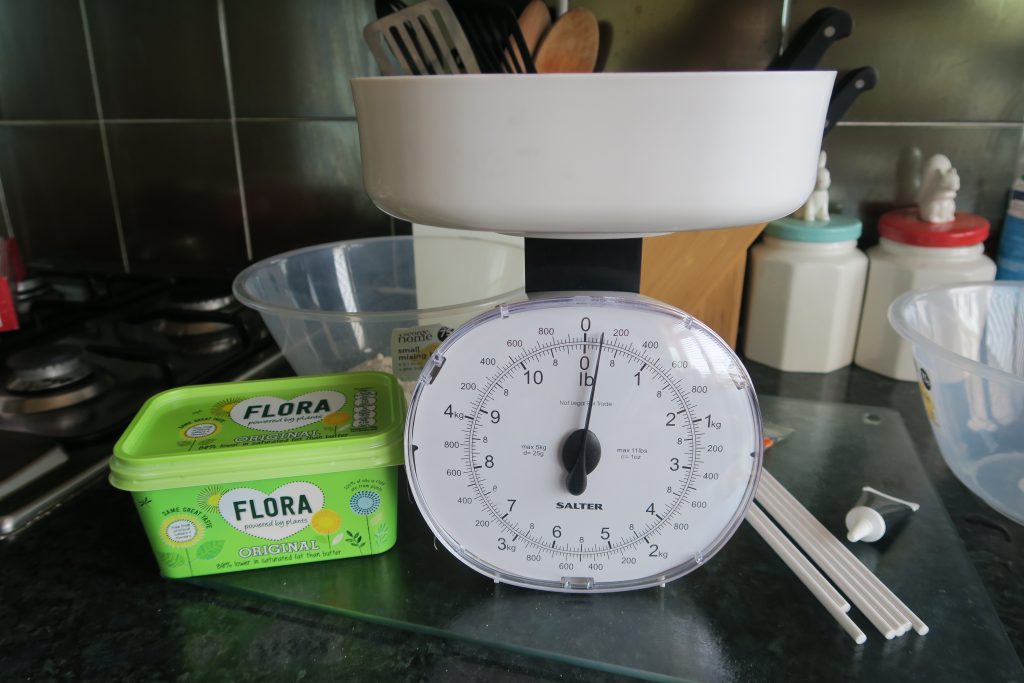 The first step was to mix 30g of softened butter in with the cake mix provided. I started off doing this with a spoon but it soon became apparent that my hands were much more useful. The instructions stated to mix the cake mix and butter until it became a dough and then divide the mix equally into 6. 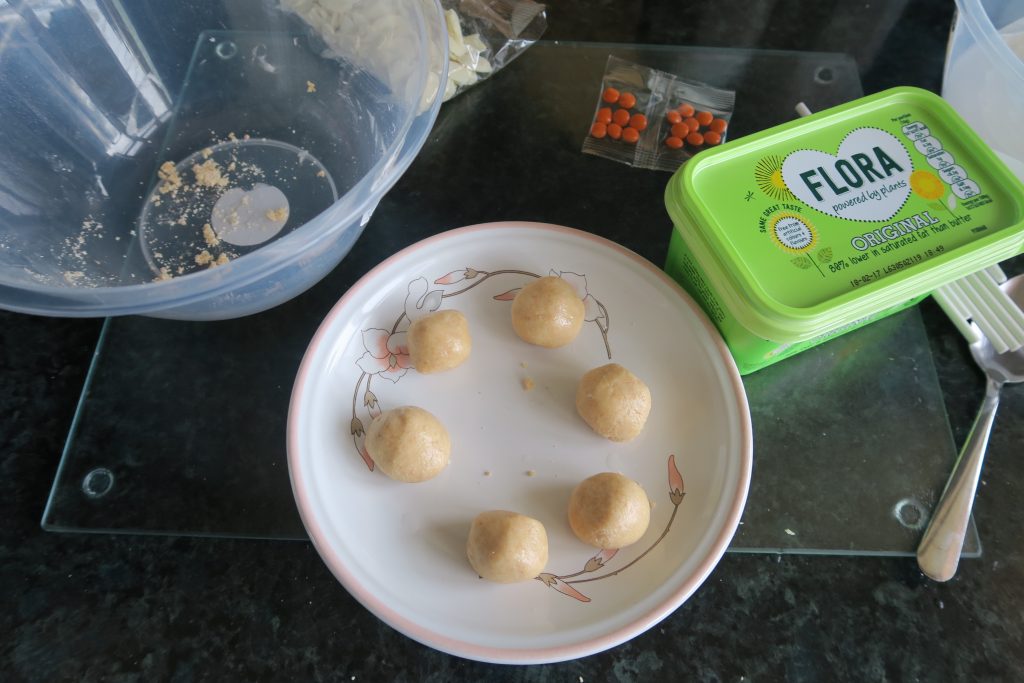 These are my finished snowman heads, please ignore that one is clearly smaller than the rest (oops!) 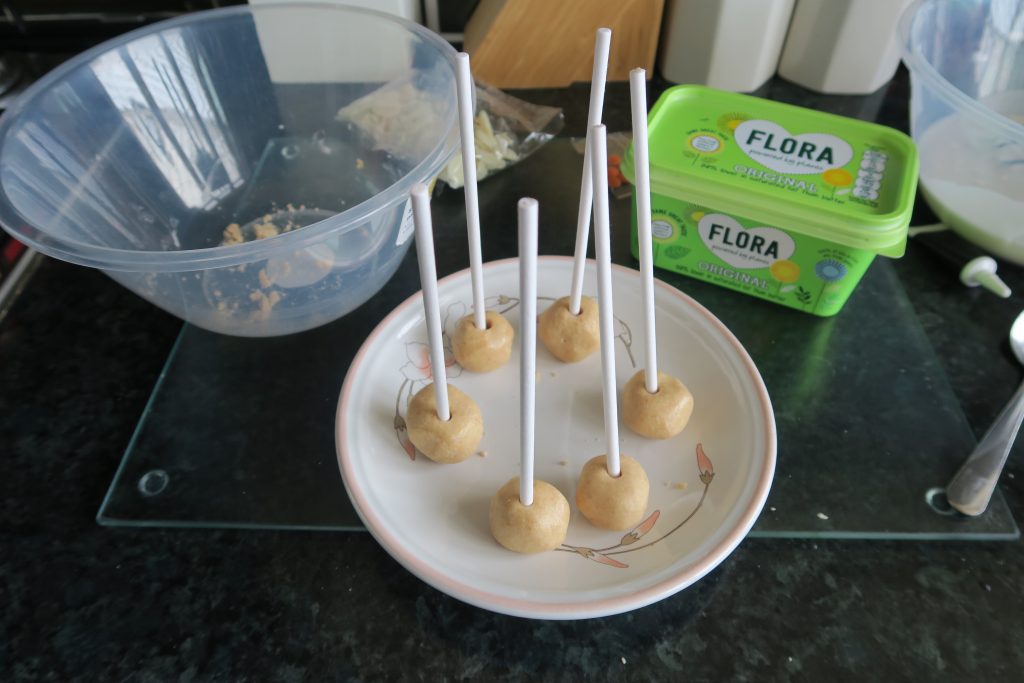 Once that was done it was time to insert the straws/lollipop sticks, this was slightly fiddly as I kept ending up pushing the sticks through to the top of the ball, essentially skewering my snowman heads!

I somehow eventually managed to rescue them and proceeded to put them in the fridge to set for 20mins. 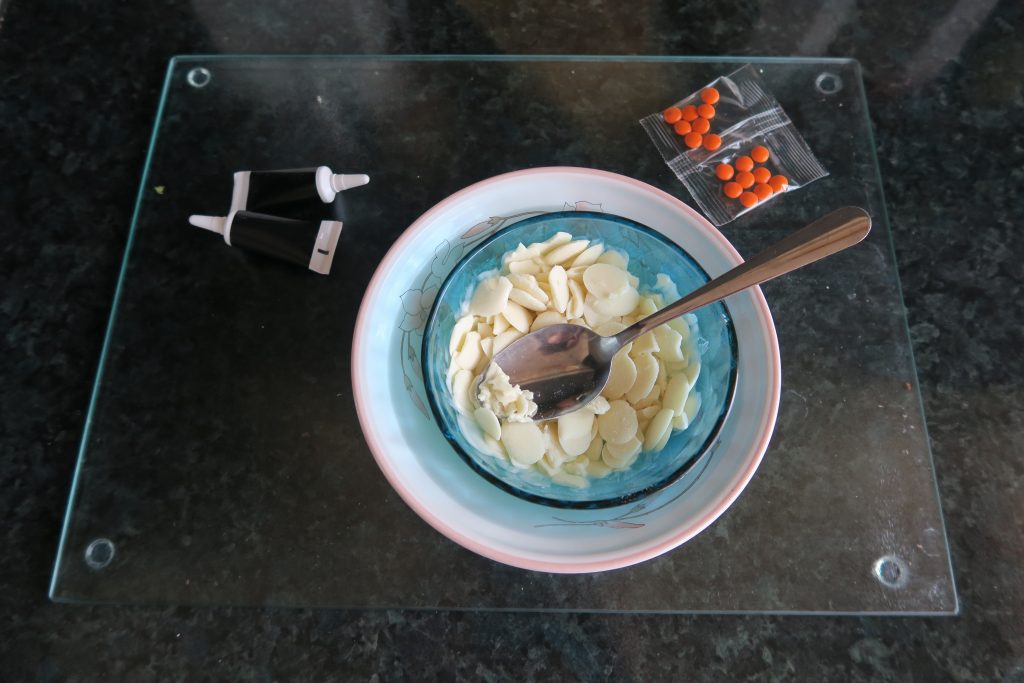 Whilst waiting for them to set I got down to melting the white chocolate provided. I opted out of heating it on the hob and instead inserted one smaller bowl into one bigger bowl. I then filled it with boiling water and stirred the chocolate until it melted. It was done it no time and much easier than letting it solidify on the hob! 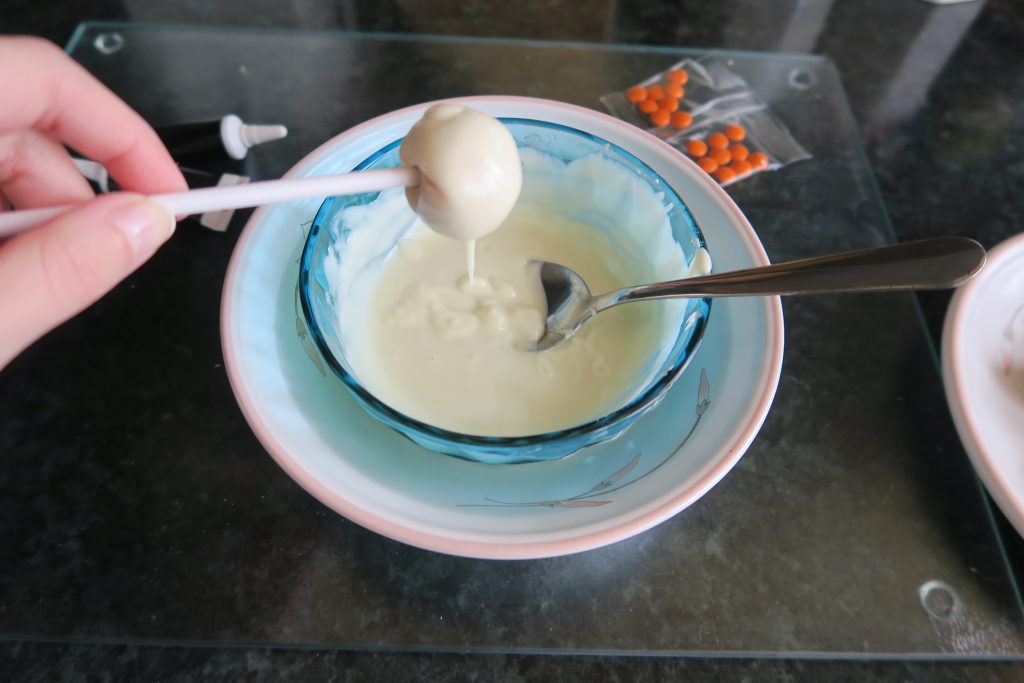 I then took my snowmen out of the fridge and coated them in the chocolate. 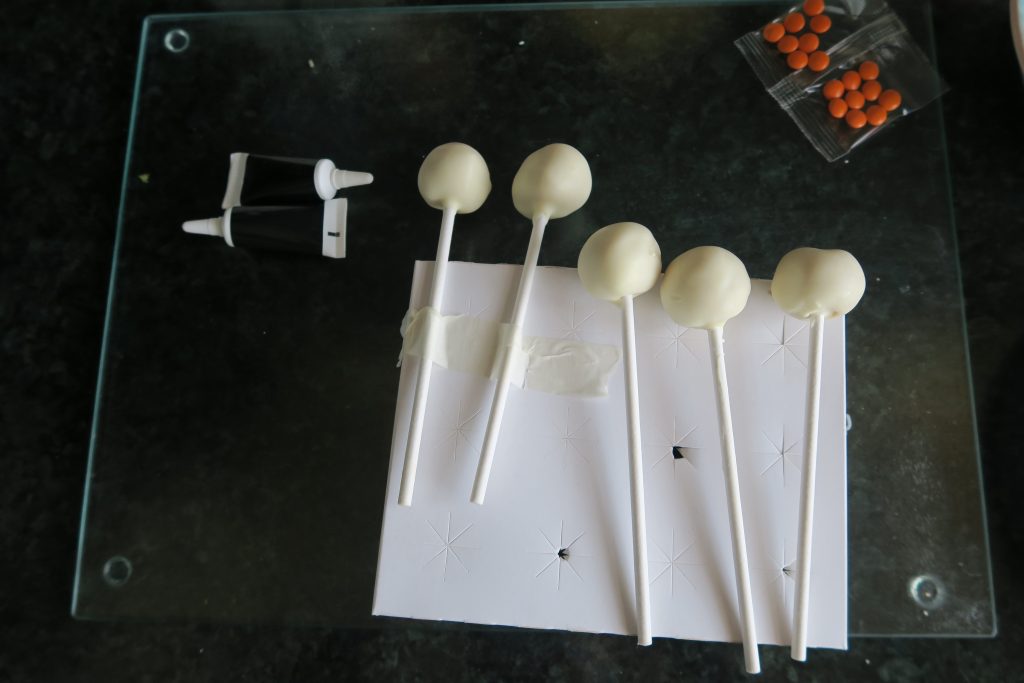 The kit came with a “cake pop stand” which was essentially a piece of cardboard with holes in it. It was flimsy so I opted to stick the cake pops over the edge so that the chocolate could solidify. 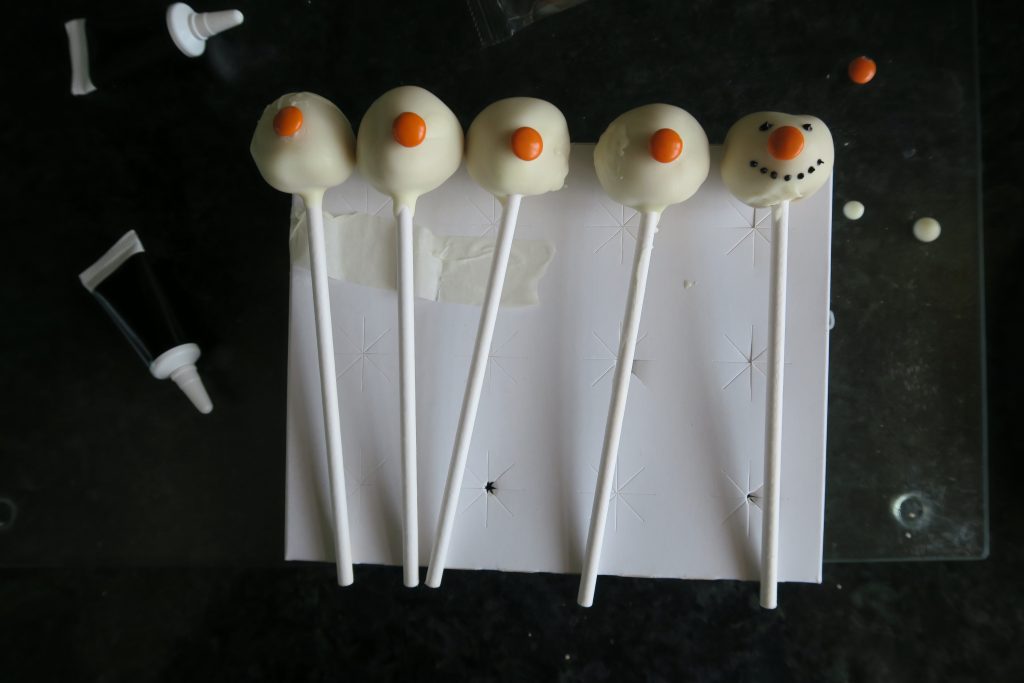 After that all that was left for me to do was to decorate them! I stuck the little orange smarties provided on with some leftover chocolate and piped the eyes and mouth using the black icing sugar. 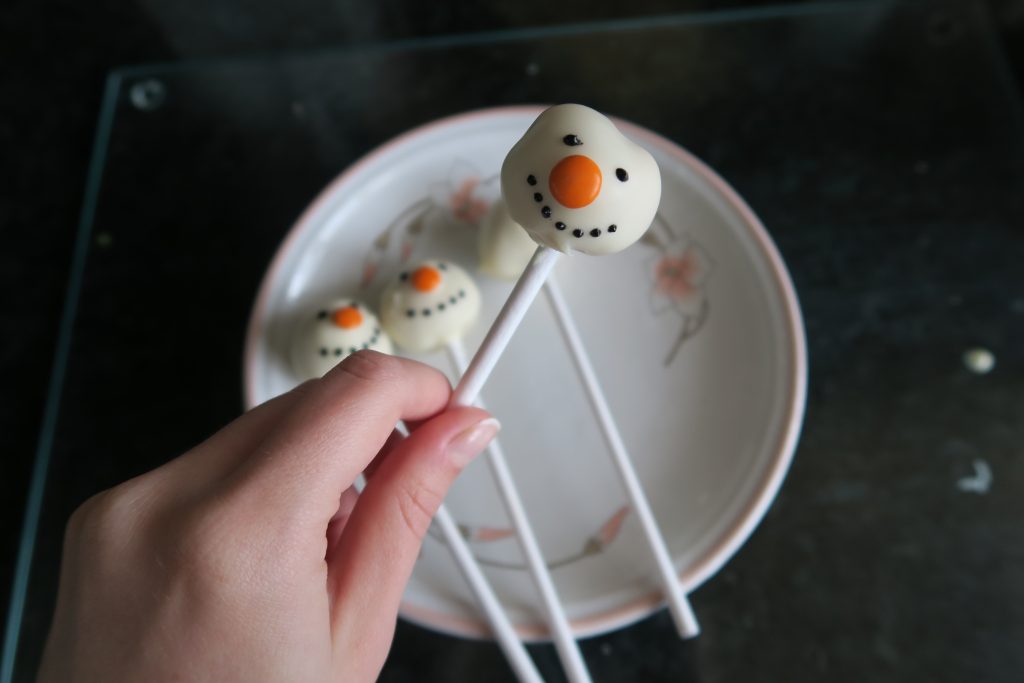 There you have it, some easy no bake snowman cake pops. I bet if you head over to Co-op they still have some of these kits kicking around if you fancied some baking over Christmas. I definitely saw some snowman meringues too which I can never resist as they are so light!

Whatever you are doing this Christmas I hope it’s a good one!