Beauty and The Beast Afternoon Tea at The Kensington

To celebrate the upcoming release of the new Beauty and the Beast film, the Kensington hotel have created a specially themed Beauty and the Beast afternoon tea. The ‘tale as old as time’ themed tea features all the favourites you know and love from the film. Today I’m here to tell you all about my experience!

The decor of the Kensington hotel is lovely, we were sat at a table in the corner, one side of which had a comfy booth-like sofa. Dotted around the room were Beauty and the Beast themed ornaments. As you can see below there was a guest appearance from Lumiere and Cogsworth!

I was ever so slightly disappointed as the area that we were sat in was REALLY dark. It was broad daylight outside yet in our little corner was very shadowy. I did ask the staff if we could perhaps relocate to a table with some better light (as I was on a mission to get some decent pictures) but unfortunately there was a private party arriving which meant there was limited space.

My advice for you if you are going would be to phone up and make a special request for a table near the window. That way you’re guaranteed nice, clear pictures. I had to be fairly liberal in my use of photoshop for mine, but I think they turned out Ok anyway! 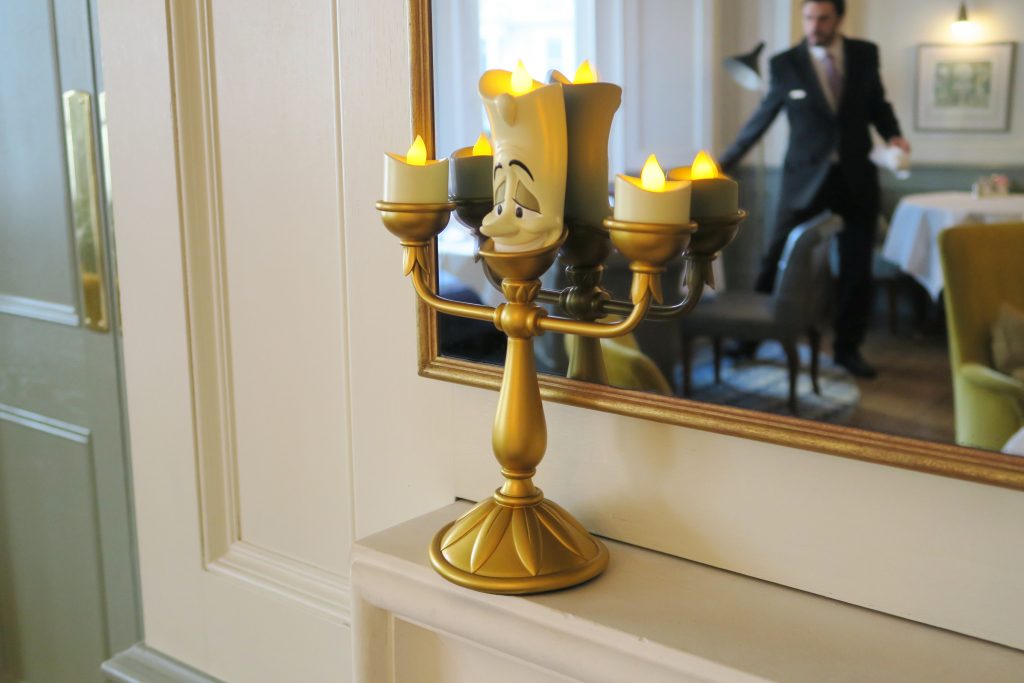 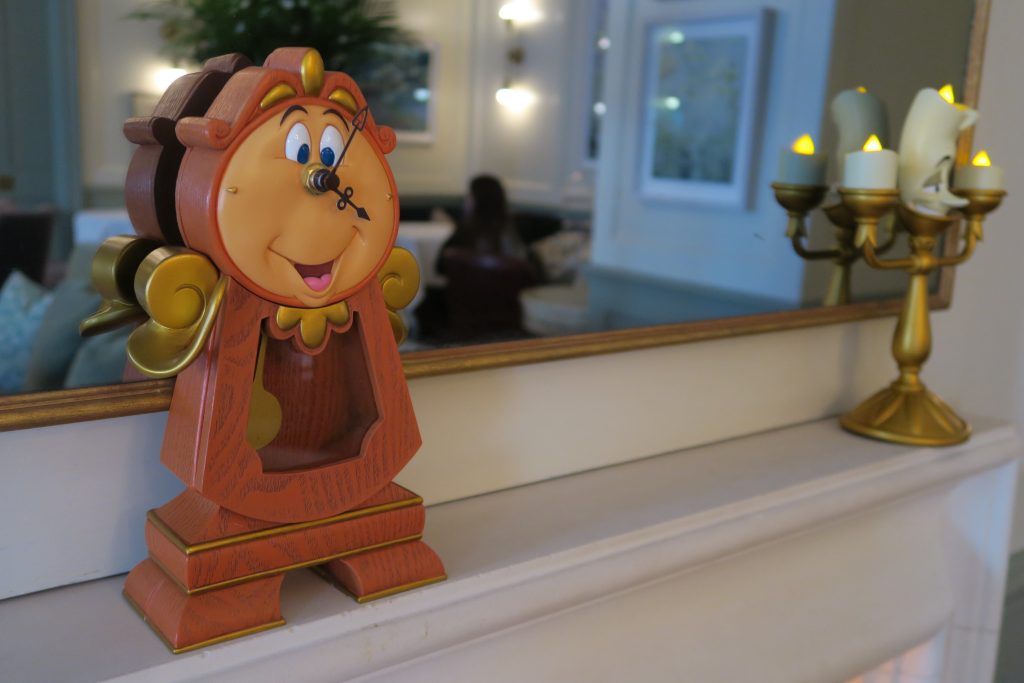 As always once you sit down you are presented with a list of teas to choose from. They had a large selection with all the usual favourites. Funnily enough I don’t really like tea, so I opted for a hot chocolate. 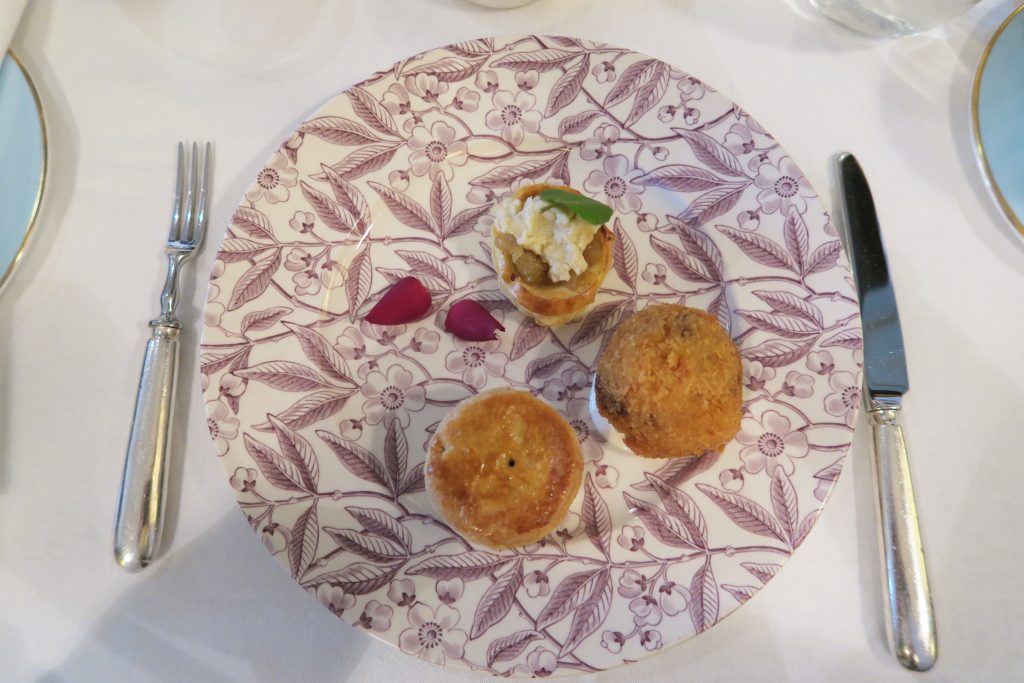 The first course you are presented with is some small savouries. I thought all of these were delicious, and just the right size! We had bite-size venison pie, beef ragu arancini and a cheese souffle with onion. They were the perfect starter to the tea and not too overpowering or heavy.

The main attraction, of course the tea. Presented on 3 tiers, the bottom contained brioche instead of the usual scones. The brioche came with accompanying chocolate spread or apricot preserve to spread. They were both very tasty. 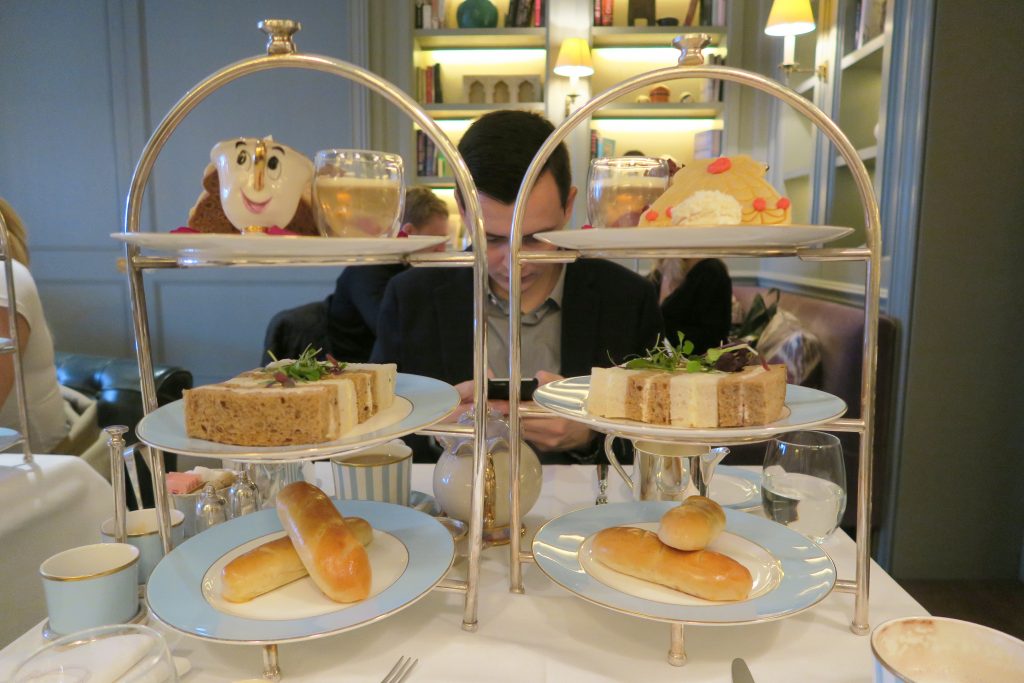 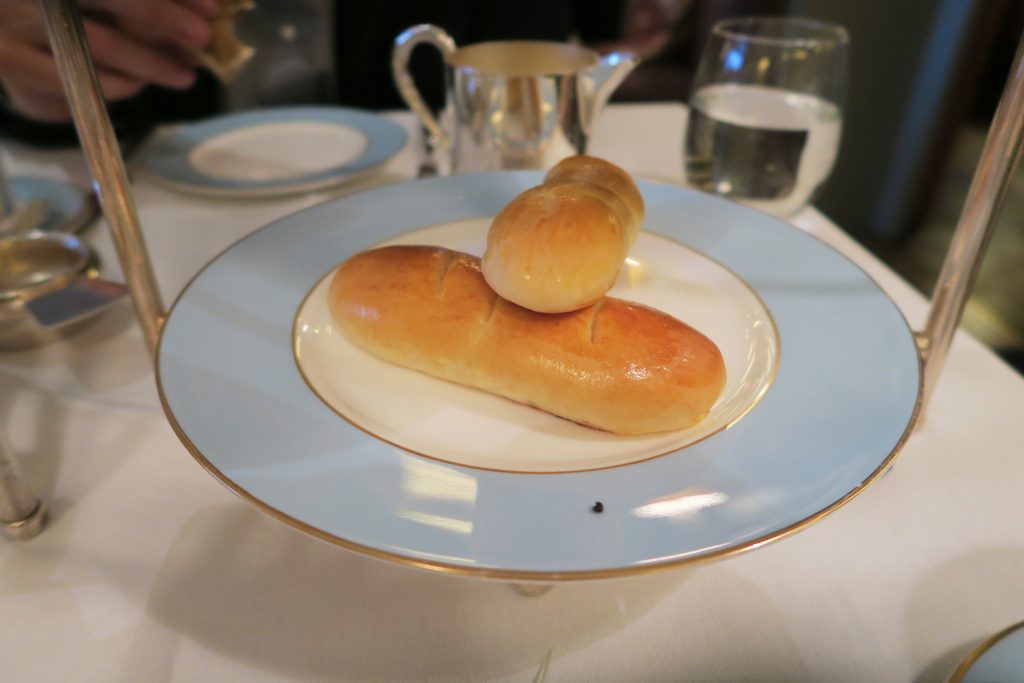 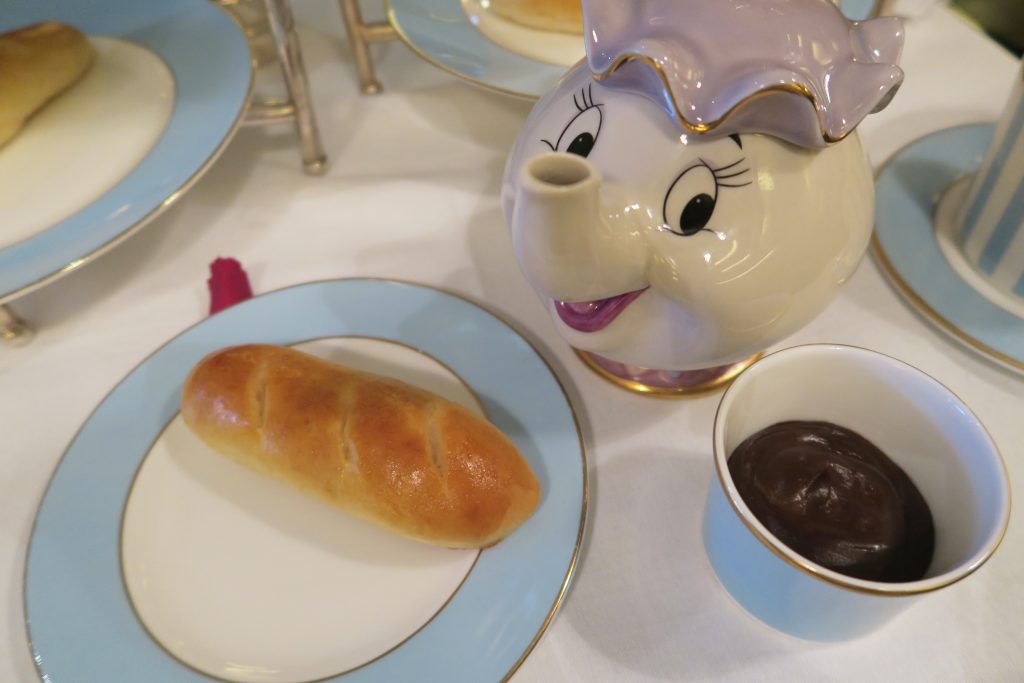 The middle tier contained the sandwiches, which were fairly average! The usual favourites included smoked salmon, chicken and cranberry, cucumber and cream and egg mayonnaise.

But who are we kidding, the best bit of an afternoon is always the desserts. 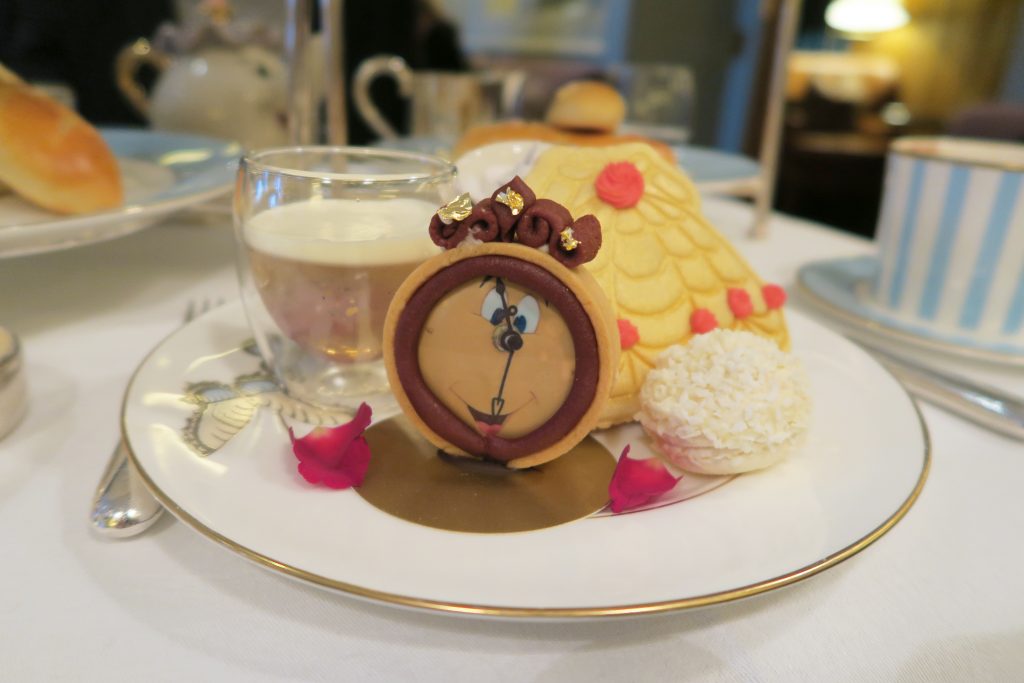 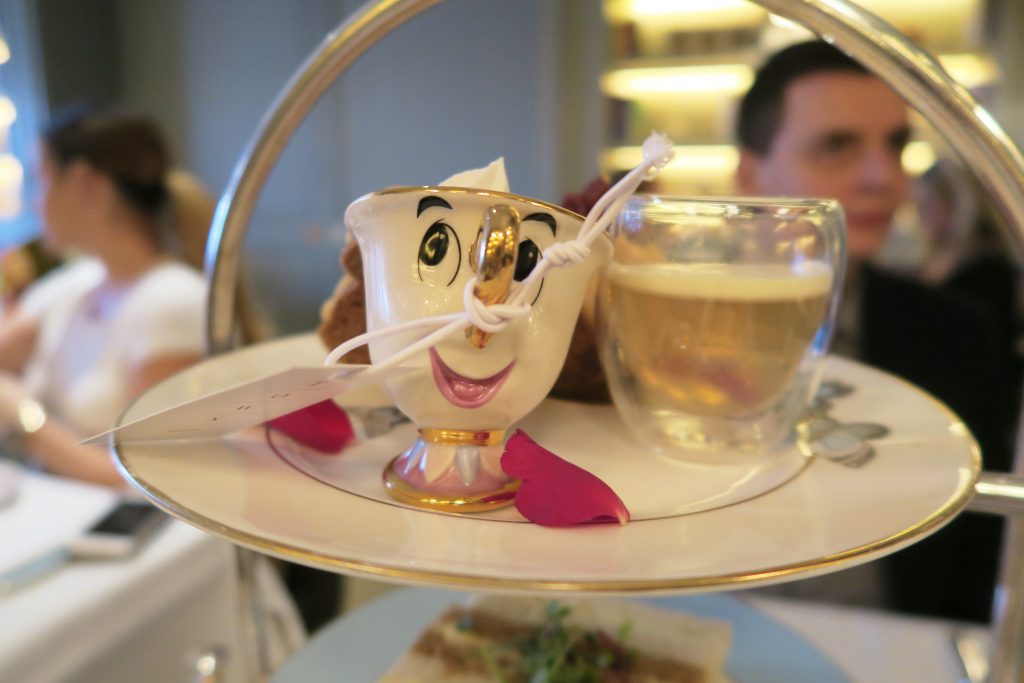 All of the sweets are inspired by characters from Beauty and the Beast. Upon placing the selection on our table the waiter also brought over a Mrs Potts teapot. The teapot contains cream, which is then used to pour on top of the vanilla & gold jelly. Inside the jelly are small rose petals – paying homage to Belle’s enchanted rose.

In addition to this there was a spiced snow ball macaroon, which contained chocolate and coconut. Paying reference to the snowball fight scene from the film.  A chocolate clock tart, featuring Cogsworth’s face which was a nice touch, and a gingerbread biscuit with marzipan to represent Belle’s dress. 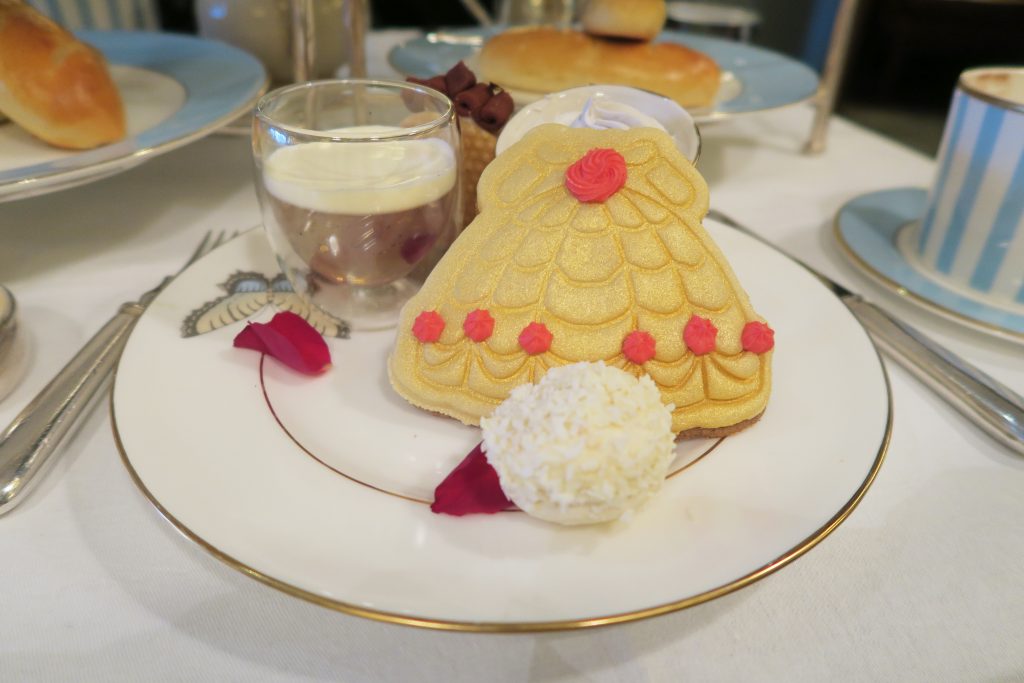 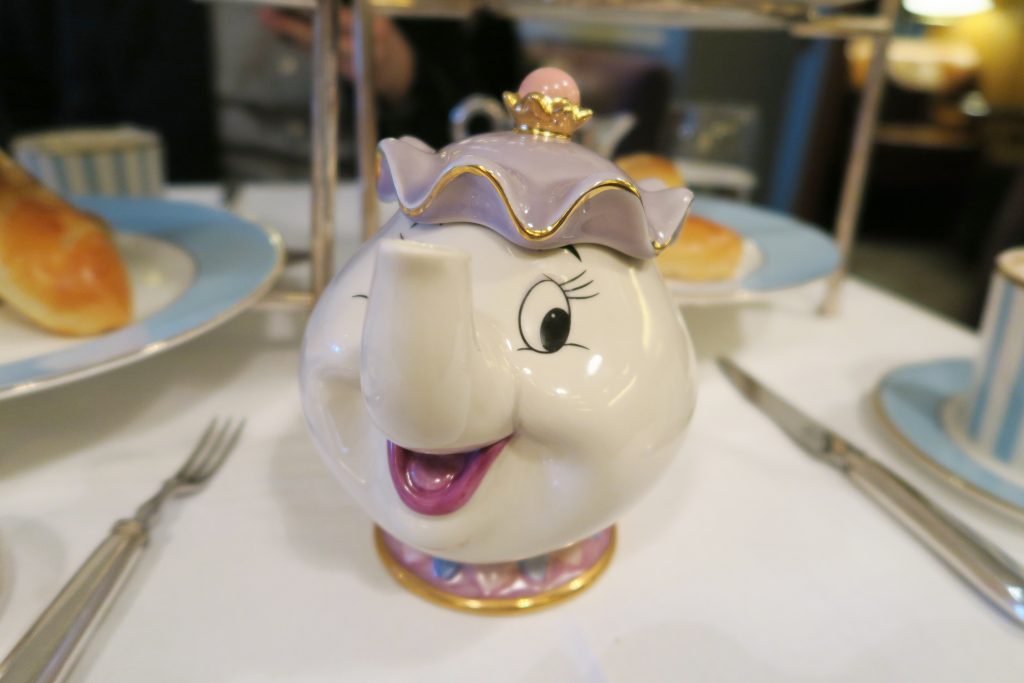 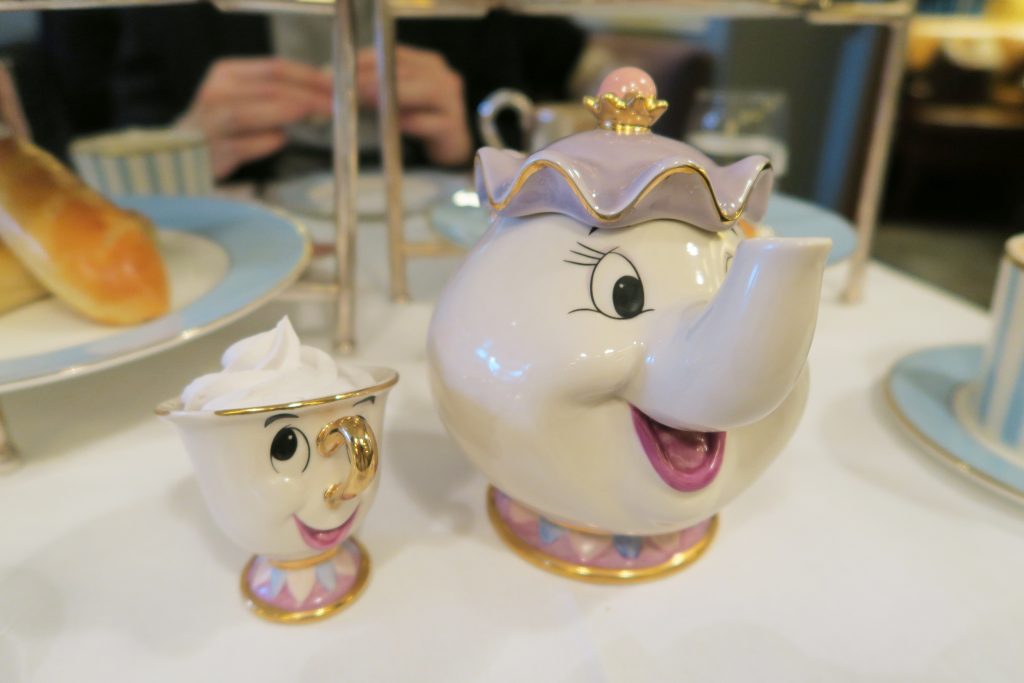 Finally there was ‘the grey stuff’, as recommended by Lumiere himself. This was a white chocolate mousse presented in a little chip cup. This was my favourite of all the desserts as it was so light! 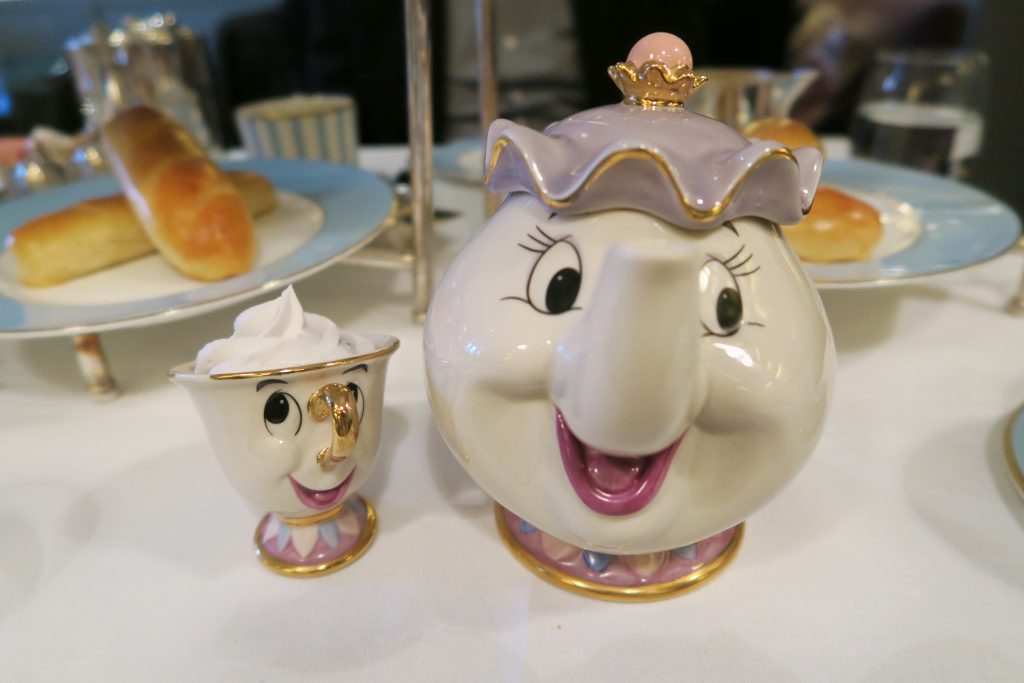 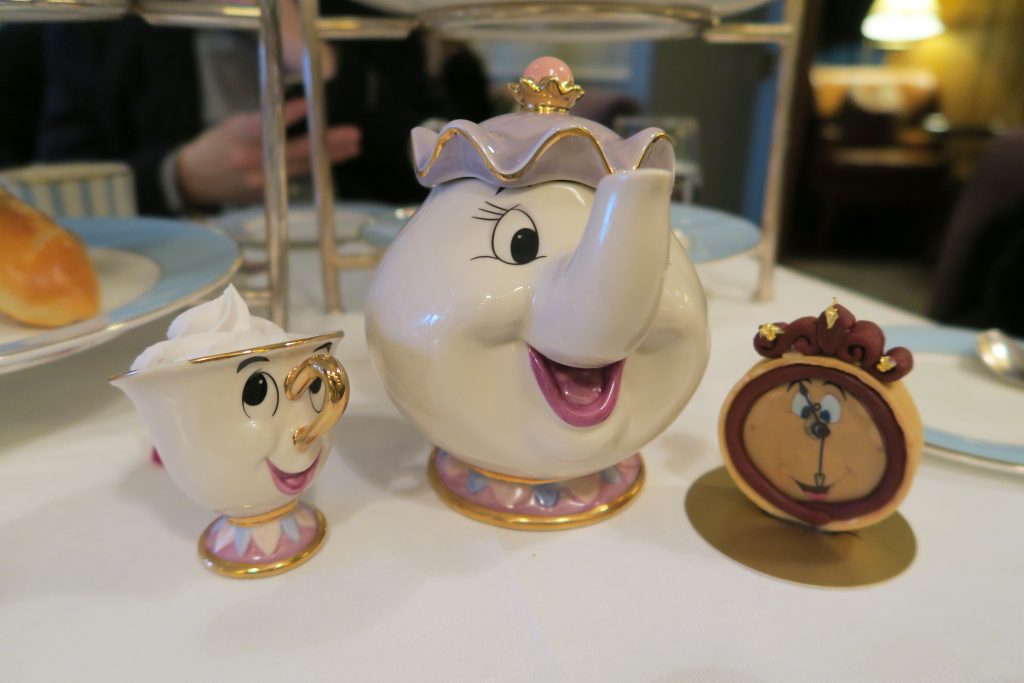 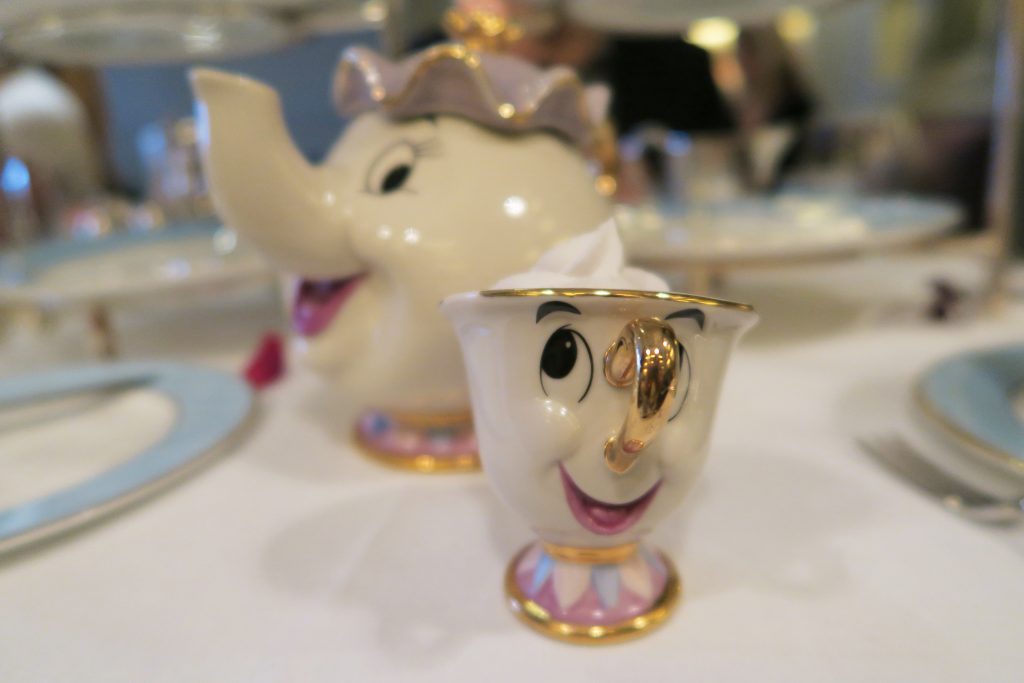 Overall I’d say the Beauty and the Beast afternoon tea is fantastic! I was lucky enough to get booked in very quickly as I think I just missed the mad rush before it went pretty viral over the Internet. The website states that it’s now fully booked until November 2017!

I really do hope they make this tea a long-term thing now proven how successful it has been. If you have a booking, you’re going to love it! If you don’t – keep eyeing up the reservation system on the site, there might be cancellations popping up. 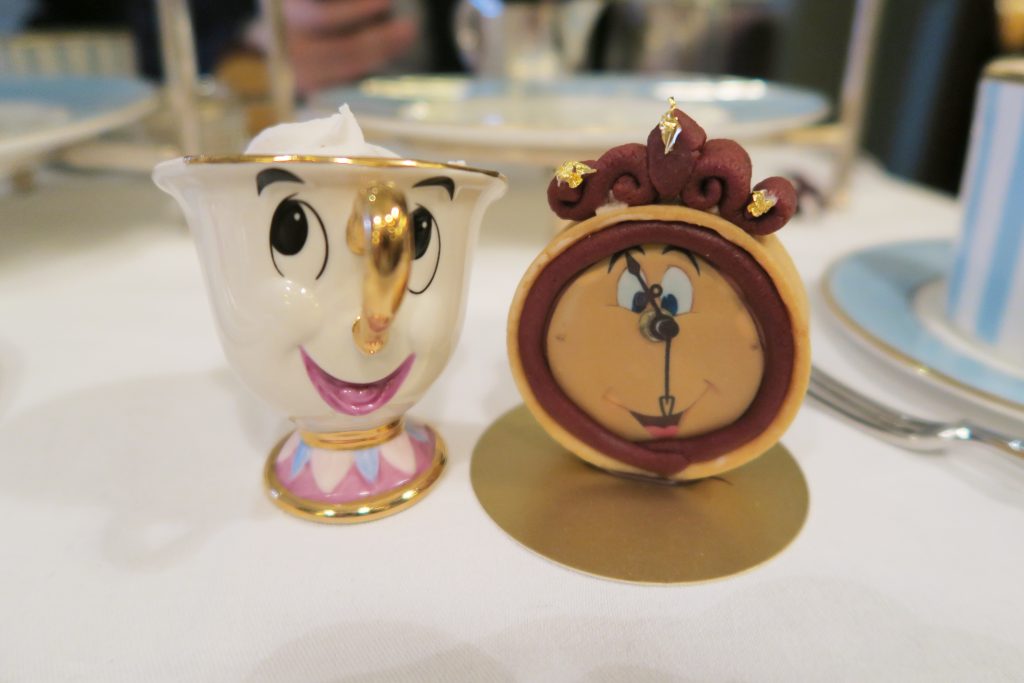 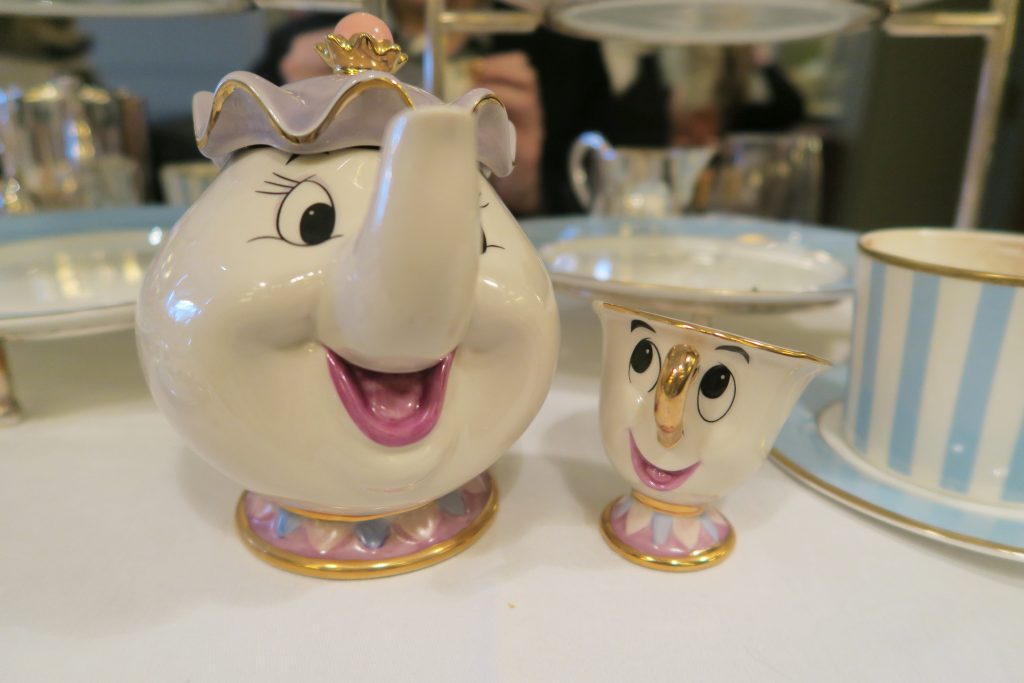 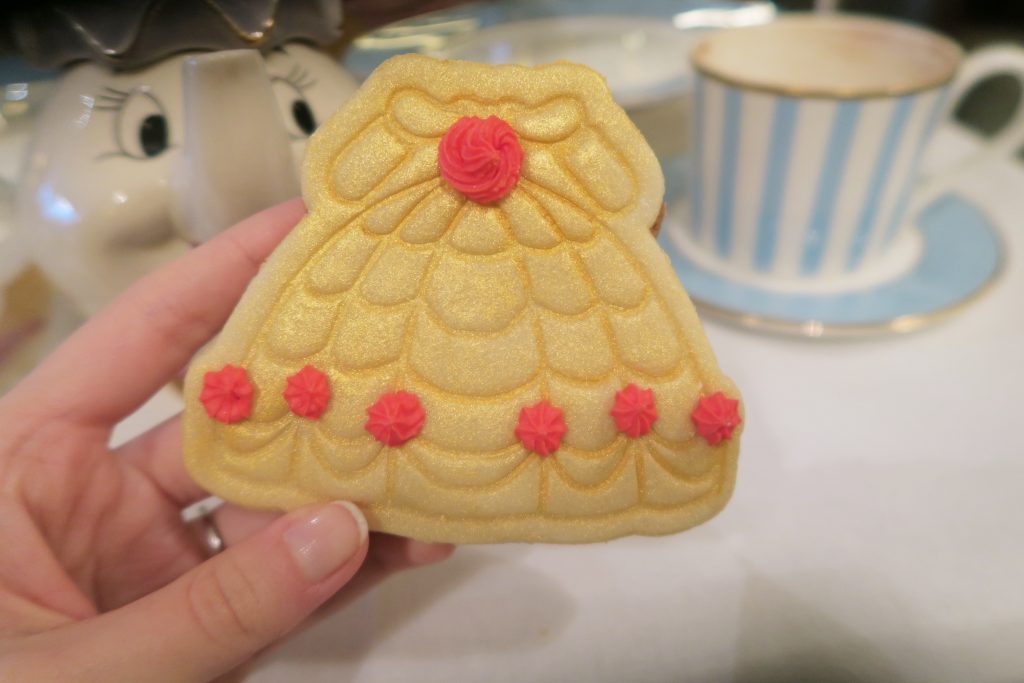